The Advanced Graphics Options section contain the bulk of the key graphics settings in Crysis 3. The next few pages will cover all of the individual advanced graphics options in detail.

Game Effects: This setting currently appears to be non-functional. To confirm this, various game effects associated with weapons, lighting and characters/corpses were tested and no change was noted. The game configuration file that holds the variables that are implemented at various levels of this setting also allows for no differentiation between Low, Medium, High or Very High, which reinforces this finding. As such, no screenshot comparison is provided.

An indication of the performance impact of changing this setting is shown below:

The graph confirms that the Game Effects setting currently seems to have no discernible purpose, showing no performance impact when altered.

Object: This setting is quite important, as it controls the overall level of detail in the game world. It determines the distance at which terrain, objects and vegetation begin to lose detail or disappear from view altogether. The available options for this setting are Low, Medium, High and Very High, and as the setting is raised, more details are shown in the game world at the cost of performance. The key differences arising from changes to this setting include:

Click here for an interactive comparison between Low and Very High.

The screenshots above demonstrate the effect this setting has in a scene with both man-made structures as well as vegetation. When going from Low to Medium, the most noticeable changes are that the derelict buildings to the left gain some added detail, and the tree to the middle left fills out with a bit more foliage. Another obvious, but somewhat surprising, addition that occurs at Medium is the reflected lighting that appears on the building faces. It's there at Low, but not visible at this distance until Medium is selected. Minor changes you might easily miss are the extra two burned out vehicles at the far left, and the satellite dish on the tower, which appear out of nowhere when going from Low to Medium. From Medium to High, and to a lesser extent from High to Very High, it's a similar story: more details and additional objects are added to the scene, especially those that are further away. To see more examples of this, refer to the screenshots under the System Spec setting earlier in this guide, and look at more distant objects in the scene at each level.

Some of the aspects of the Object setting that aren't clearly shown in these screenshots are the way in which decals and debris will look more realistic at higher levels of the Object setting. The Tessellation and Pixel Accurate Displacement Mapping features are also not shown above, so we look at them more closely below.

Click here for an interactive comparison between Off and On.

The screenshots above demonstrate the minor but noticeable difference that Tessellation brings to character detailing. In the shot on the left, Object is set to High, meaning Tessellation is disabled. In the shot on the right, Object is set to Very High, which in turn enables Tessellation. If you flick between the two you can see that with Tessellation enabled, Psycho's right arm and leg fill out slightly. It's a subtle effect to be sure, but it adds a bit more detail to characters, at the cost of performance. Tessellation also affects various objects, such as trees and terrain - see the r_Tessellation based commands under the Advanced Tweaking section for further examples.

Click here for an interactive comparison between Off and On.

The screenshots above show the difference when Pixel Accurate Displacement Mapping (PADM) is turned off on the left, and then turned on in the screenshot on the right. The technique is similar to Tessellation, and is quite performance intensive on your GPU. With PADM on, the tree shown becomes much more filled out, with gnarled roots, and more textured bark.

An indication of the performance impact of changing this setting is shown below: 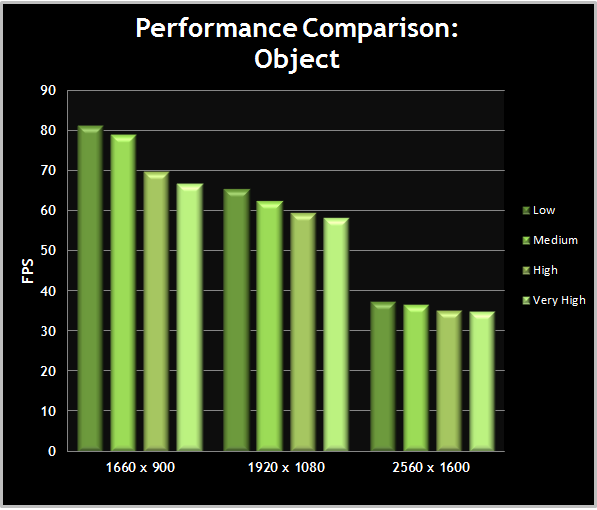 The graph shows the noticeable performance impact the Object setting has as it is raised. The biggest jump is from Medium to High. At Very High, the additional performance drop comes primarily from the increased object and character complexity enabled via Tessellation and Pixel Accurate Displacement Mapping. Medium is the recommended minimum value for most systems, as it prevents the game world from looking too barren, especially at closer distances, and also reduces noticeable object and vegetation pop-in as you wander around.