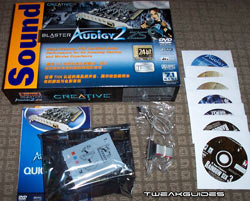 The DFI motherboard I purchased has an 8 channel Karajan audio module which is actually quite good by all accounts, so I didn't have to buy a dedicated sound card at all. However I decided to buy a Creative Audigy 2ZS for one major reason: in almost every recent game, to get the best quality and least troublesome sound effects you need to enable Hardware support, and in particular, use EAX Advanced HD 4.0. Creative have pretty much cornered the market in audio, and whether good or bad, if you're not on board with a decent Creative sound card (namely a full-spec Audigy), you'll miss out on a lot of effects in games, as well as finding hardware incompatibilities and audio glitches when using other sound cards.

I was sorely tempted to wait and see what the new Creative X-Fi audio solution will be like, given games like Battlefield 2 already support it (once again due to Creative's dominance). However it isn't out yet, and there are no indicators of what it will be like in terms of price or performance, so I settled on an Audigy 2ZS. For most people I would recommend an Audigy series card primarily due to the above reasons, and of course make sure to get a full Audigy, not a Value, LS, NS or otherwise as these can still have problems in some games.

In terms of speakers, well I live in an apartment and because I don't want to blast the neighbors I've stuck with a set of relatively inexpensive but capable Sennheiser headphones. Headphones can actually provide richer sound purely because they direct all sound straight into your ear, rather than being bounced around the room and/or blocked/distorted by objects in the room. For gaming purposes they provide excellent positioning as well, and you can raise the volume for that 3am gaming session without annoying anyone else. User feedback is the best method of determining which headphones or speakers suit you as it is highly subjective. I just went to a local hi-fi store and grabbed what seemed to be mid-to-low end headphones which by most accounts would do a good job without costing the earth. Hardly scientific, but luckily it worked.

This is a fairly simple choice. Given how cheap CD and DVD drives are, and the fact that it's a bit wasteful to have separate CD/DVD/CDRW/DVDRW drives, why not buy one drive which does it all? Well that's what I did, and for a very low price. I made sure to buy the OEM version of this drive which is identical to the retail version (minus the software and cabling I don't need) at a much cheaper price. I don't think there's any real excuse for someone upgrading their system to skip buying an all-on-drive like this, particularly as more and more games come out in DVD format, and burning DVDs being such a great way to backup large amounts of data in one hit.

Note, in the picture above I also include a black 3.5" 1.44MB Floppy drive on the left. I won't cover this in detail as any generic 3.5" floppy drive will do - the main reason for retaining one of these in a modern system is for BIOS upgrades which are still best done using the old floppy method while in DOS.

The monitor is obviously a very important component, mainly because if you're into gaming and you've bought a high-end gaming card there's not much point displaying it through a low-end display. This is particularly true for LCD displays, which have in the past had a poor reputation for gaming due to their relatively high Response Times and low Native Resolutions. In fact the choice at the moment for most people buying new displays is whether to buy an LCD display, or stick with the traditional CRT display. For more details of LCD vs. CRT technology, see my Gamer's Graphics & Display Settings Guide. If you see the picture of my desk at the end of this article, you'll see that space and weight were also important considerations in my case.

The Hyundai L90D+ is currently getting rave reviews from users, so during my research it was hard to find any truly negative reports of it. It is a true 8ms panel with excellent contrast ratio and vivid colors. This seemed a little too good to be true on paper, and of course there was the usual risk associated with LCDs of purchasing one only to find several dead pixels which would be incredibly annoying. However I took the plunge and sight-unseen, I purchased this monitor. Fortunately it came with zero dead pixels (which you can search for using this free Dead Pixel Buddy utility), and has remained flawless over the past few months. It plays games without a hint of blurring, ghosting, pixellation or any other LCD defects, and is almost identical in appearance and performance to my old LCD monitor. The colors are very vivid and again a match for my CRT. It is absolutely crystal-clear at its native resolution of 1280x1024, much sharper than any CRT monitor. At non-native resolutions (e.g. running 1024x768 Windows Desktop), given a bit of tweaking of my graphics card settings using my Nvidia Forceware Tweak Guide (or you can use the equivalent ATI Catalyst Tweak Guide), the use of ClearType, and using a DVI cable (included with the monitor), the image is still excellent and clear and scaling is very good when using the graphics card's scaling unit instead of the monitor's (which is average).

All in all, this LCD is one of the best purchases I have made, as it is a price/performance winner and even at a higher price is still competitive. I bought this monitor a month before buying the rest of my system, and so far it is still a joy to use.

For aesthetic reasons I decided to buy the MS Wireless Keyboard and Mouse (comfort Edition) as it matches the theme I have chosen for my system (again see the entire system setup pics later in the guide). I've been using an MS wireless optical mouse (the same as that which comes with this Wireless Desktop set) separately for over a year and was very impressed with its responsiveness and accuracy, especially during gaming. So the natural progression was to buy a similar wireless keyboard as well.

Truth be told the mouse and keyboard are great to use, but the keyboard is still a fraction less responsive than a wire-bound regular PS/2 keyboard. I still use it for gaming, and for the most part it's great. My only complaint is that occasionally the keyboard will not register a keypress, but I guess at the end of the day that's the nature of wireless devices.

Note that I didn't install the special drivers which come with this wireless desktop set, as it actually functions perfectly using the default Windows XP drivers, and in the spirit of minimizing background programs I don't install drivers unless they're absolutely necessary. The drivers only enable some of the additional buttons on the keyboard (such as the 'zoom slider' and the various hotkeys), none of which I use.

Here's what could be considered a controversial choice. You may well be wondering what the point of having a 64-bit system is if it's not coupled with a 64-bit operating system like Windows XP Professional 64-bit (a.k.a Windows x64). Well I was sorely tempted to dive into a 64-bit OS, but in the end I chose to stick to my tried-and-true copy of Windows XP Professional 32-bit edition which I've owned since October 2001. Why? Well three reason: firstly, Windows x64 costs a fair bit, even when purchased as an OEM edition with a new machine (around $200AUD). I thought this a was a bit silly, considering the next version of Windows codenamed Longhorn is due out in less than a year, and is a true next-gen 64-bit operating system. Second, Windows x64 performance vs. the regular 32-bit performance is almost identical based on a range of reviews and comparisons I'd seen around the web, such as this one. This is particularly true for gaming, where x64 seems to show no real advantage. Third, device drivers for Windows x64 are still being developed, and are not as mature and hence not as stable or well-performing as the 32-bit versions. All of these reasons meant that for minimal headaches and maximum performance Windows XP 32-bit is still king until Longhorn comes out, so that will be my next OS upgrade.

Ok, so now you know my reasons for purchasing this particular equipment. Sure, you may not agree with me on some of the choices above, but at least you have a fair idea what I was thinking and the kinds of things I was looking out for when I bought my gear. Just remember, I'm not a fanboy. I'm too old and too sceptical to start out with the preconception that a particular brand is better than another, or that one brand "cares about the PC enthusiast". All companies are out to make a profit, and the only thing which keeps them on the right track in producing well-performing yet cheap products is competition. Buy the best-performing products at the best prices available, and don't get hung up on brand (except as a basis for things like after-sales support for example).

Next up we look at the practical impact of all these choices in the following section, both through benchmarks and real-world usage.