This section contains full descriptions and recommendations for Mass Effect's in-game settings. You can use these to get a good balance between image quality and performance on your machine, however I can't give you specific instructions on what to turn on or off, nor can I provide precise performance impacts. It all depends on your particular hardware combination, and more importantly your personal taste for the trade-off between performance and image quality.

To access the in-game settings, click the Options item in the main menu, then refer to the relevant sections below. Make sure to click the Apply button each time you change any settings, and note that some settings require a restart of the game to be applied properly. 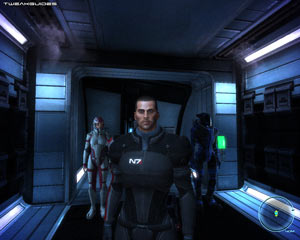 Windowed Mode: If set to Yes, the game will run in a window rather than in full screen mode. In general for stability and performance I always recommend full screen mode (i.e. select No here), as there can be memory and resource management issues when a game is run in windowed mode. 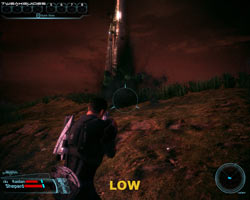 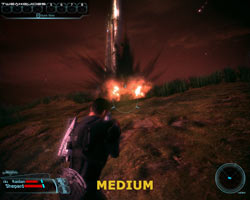 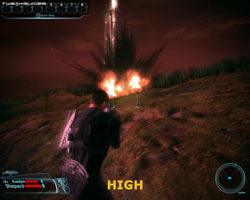 Particle Effects: This setting controls the level of detail on particle effects - that is, special effects composed of smaller individual particles, such as smoke and explosions. The available options are Low, Medium and High. The main performance impact of this setting is felt during combat, and in areas with large clouds of dust, fog or smoke. In practice the performance impact between the three levels seems minimal, and as the screenshot comparison above shows, the visual difference is also not that great. Even at Low, the explosion and subsequent dust cloud seem quite satisfactory; at Medium and High there's a slightly greater volume of dust and a brighter flash.

Gamma: This slider controls the overall brightness of the game, and has no performance impact, so set to suit your tastes.

Resolution: This setting allows you to select the resolution of the game image, measured in pixels wide by pixels high. The higher the resolution, the more detailed the image on screen, and also the less jagged lines there will be (See Antaliasing further below), but the lower your performance. For more details see the Resolution section of the Gamer's Graphics & Display Settings Guide. The number of resolutions available is limited by what both your graphics card and monitor can handle. Resolution has a noticeable impact on performance, so if nothing else works to improve your Frames Per Second (FPS), lower your resolution, or check the ScreenPercentage setting in the Advanced Tweaking section.

Note: Although Mass Effect supports widescreen resolutions, some people may feel that it doesn't do so properly - e.g. see here for more details. If you want to adjust the Field of View, see the FOV console command in the Advanced Tweaking section, however note that using a different Field of View can cause unintended issues.

Antialiasing Support: Just as with other games based on Unreal Engine 3.0, such as UT3 or BioShock, Mass Effect doesn't necessarily allow for normal use of Anti-Aliasing to smooth out jagged lines. There is no in-game Anti-Aliasing option, so at present there are three main ways to apply Anti-Aliasing to the game:

In general, since Antialiasing doesn't seem to completely eradicate all jaggedness and subsequent shimmering in the game, I recommend that before turning to AA you first attempt to raise the resolution and/or consider the use of the Film Grain filter and Motion Blur options where possible, as these can cover up jaggedness with much less of a performance hit. 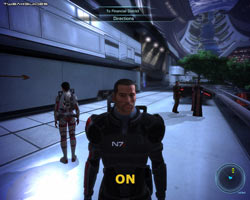 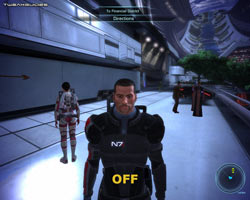 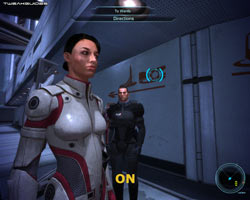 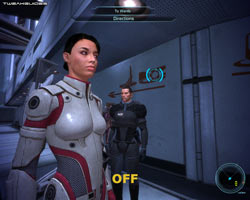 Dynamic Shadows: This setting controls whether interactive objects in the game world, such as characters and vehicles, cast shadows, both on themselves and other surfaces. If set to No, these objects will not cast any dynamic shadows, which can significantly improve performance at the cost of some realism. The first set of screenshot comparisons above demonstrates that when this option is disabled, the shadows cast on the ground by the various people in this shot are all removed, and the shadows on Shepard's face are also reduced. Note however that some shadowing remains - primarily fixed shadows cast by static objects such as buildings, and some general shadow detailing on characters. The second set of screenshots above shows that by disabling Dynamic Shadows you also remove the glitchy shadows which are visible at times when viewing close-ups of people particularly during dialog sequences.

In general, the shadowing in Mass Effect is a source of some complaints, as it can look quite glitchy at times. Rather than disabling Dynamic Shadows, which removes most shadows and thus reduces realism, you can adjust various shadow parameters in the game's BIOEngine.ini file to adjust shadow appearance. This is covered in more detail in the Advanced Tweaking section, see in particular the DepthBias, MinShadowResolution, MaxShadowResolution, bEnableBranchingPCFShadows, ShadowFilterRadius and setting descriptions for more information. Note: the common solution presented for fixing glitchy shadows - namely to set DepthBias=0.030 - doesn't actually work quite as intended; it removes certain shadows rather than fixing glitches. However it's probably the best workaround for removing glitches without completely disabling Dynamic Shadows altogether. Again, refer to the Advanced Tweaking section for details.

Update: As of the 1.02 Patch, Dynamic Shadows may have been disabled because the DepthBias value, as discussed above, now defaults to =0.030. If this is the case on your system, you may wish to reset it back to =0.012, which should return dynamic shadowing - see the Advanced Tweaking section for more details.

Texture Detail: This setting controls the appearance of textures, which are the surfaces of all objects in the game world. The available options are Low, Medium, High and Ultra High. The higher the setting, the more detailed textures will be, but you may experience increased stuttering. To see an animated screenshot comparison click this link: ME_Textures.gif (1.2MB). The most noticeable change in this comparison is on the surface of the rocks in the background - as you can see, there is a slight decline in the surface detail at High, by Medium it's noticeably flatter and undetailed, and by Low a great deal of detail is lost. The detailing on the ground also starts to become noticeably blurry and blocky at Medium and again by Low it is very poor quality. In general unless you have a low-end graphics card with only 256MB of Video RAM and you are also running at a very high resolution, then it is recommended that you leave textures at High or above.

Importantly, the game must be exited and restarted for changes to Texture Detail to be implemented properly. Note further that Mass Effect's UE3.0 engine uses a streaming approach to textures, originally designed for console systems - whenever you load up a saved game or enter a new area, there may be momentary pauses as textures are 'streamed' into view on various surfaces. That is, they start off being flat and undetailed, and it takes a few moments for the full texture detail to be loaded up and shown; this is a normal part of how the Unreal Engine 3.0 works, and unfortunately cannot be disabled or changed.

Filtering Mode: The setting controls the level of filtering used to make textures clearer, especially as they recede into the distance. For more details on how texture filtering works, see the Anisotropic Filtering section of the Gamer's Graphics & Display Settings Guide. The available options here are Point, Linear and Anisotropic, with the higher the level the greater the clarity at the cost of FPS. Point is the most basic, Linear provides a minor improvement, but at Anisotropic the filtering of distant textures visibly improves. Note that when Anisotropic is chosen it actually applies 4x AF to the image by default, however you can manually adjust the precise level of Anisotropic Filtering by altering the MaxAnisotropy variable, as well as the base type of filtering used with the Trilinear variable (in combination with each other), both covered in the Advanced Tweaking section.

The next page continues the In-Game setting descriptions.