This section brings the guide to a conclusion, but has some important tips and tweaks, so it should not be skipped. 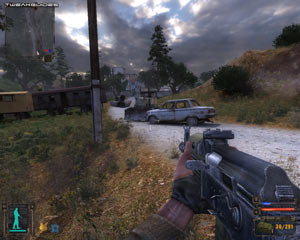 For those of you simply having problems getting used to the rather brutal and sometimes confusing world of The Zone, here are some resources and tips you may find useful. For the basics, be sure to read the game manual which can be found in electronic format under your \Program Files\THQ\S.T.A.L.K.E.R. - Shadow of Chernobyl directory. Some more basic tips include:

If you get stuck and aren't sure where to go or what to do, you can check the STALKER Gamespot Guide. You can also use this Full Map of The Zone with all major areas displayed. Finally, remember that you can adjust the difficulty on the fly, so check your game difficulty and if things are too tough, lower it temporarily.

Although this has already been covered in the Advanced Tweaking section, I'll spell it out again as it is a very useful tweak. If you find that the introductory movies/logos which play at STALKER's startup are annoying, you can skip them completely by going to your STALKER launch icon, right-clicking on it and selecting Properties. Then in the Target box, one blank space after the last character, insert the -nointro switch and click OK. Your Target box contents should look similar to this:

The next time you go to launch STALKER using this icon, it will quickly open at the main menu.

One of STALKER's annoyances is the way in which there are regular loading pauses/stuttering as you wander The Zone. You can reduce this by lowering your Textures Detail setting (See In-Game Settings section), however regardless of your settings it will still occur as different areas are loading up once you enter them. The extent to which you'll get this stutter depends on how much RAM you have, and how fast your hard drives are, as well as your Windows hard drive and memory management-related settings. Check the Drive Optimization and Memory Optimization chapters of the TweakGuides Tweaking Companion for more help.

However, there is one thing you can try which not only greatly speeds up initial loading times, but may also reduce stuttering: the -noprefetch command line switch. This switch is covered on the previous page of this guide, and instructions for using it are similar to the ones provided further above for the -nointro switch. Once you've enabled the -noprefetch switch, it will disable the prefetching which occurs when STALKER loads up a saved game, preventing the game engine from preloading a range of resources into memory. This obviously speeds up the loading of saved games. However you'd think that in return this would increase in-game stuttering, yet on my system it also helped to reduce in-game stutter and loading pauses as well. I suspect it may be that STALKER is too aggressive in preloading unnecessary game elements, taking up too much RAM perhaps, which then forces the game to pause longer as data is swapped when new areas are entered. Disabling prefetching seems to allow smoother loading of smaller amounts of data more regularly.

Your results may vary based on how much RAM you have, and more importantly how fast your hard drives are, but it is well worth trying. Even if the stutter remains the same, at least your game loading times will be greatly reduced.